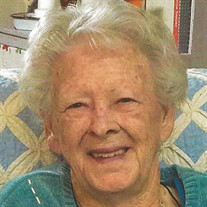 Oak Ridge, TN/East Stone Gap, VA Anna Ruth Barker, age 90, passed away Monday, August 10, 2015 at her home, where she resided with her daughter Stella, and surrounded by her family. She was born November 29, 1924 in East Stone Gap, Virginia, the daughter of Dewey Baxter Cole and Bertha Marie Hamilton Cole. “Lushie” was named by her sister, who could not say Ruthie, so she called her “Lushie” and it stayed with her all her life. She lovingly raised six children who all loved her dearly. The family called her their “Rosie the Riveter” as she worked at the Naval Shipyard in Norfolk, VA during World War II. In later years, she worked with Brater-Brockwell Greenhouse for a brief period. She enjoyed crocheting, counted cross-stitch, and quilting; and was an excellent cook. In addition to her parents, she was preceded in death by husband, Paul Gilbert Barker; son, Walter Edward Barker; and siblings, James Scotty Cole, Walter Cole, Nellie Grey Harris and Lois Jean Stapleton; and grandson, Derek Ryan Funk. She is survived by sons, Paul Eugene Barker and Charles Wayne Barker, both of Oak Ridge; daughters, Betty Ann McMahan and husband Ronnie of Clinton, Patricia Louise Funk and husband Kevin and Stella Marie Barker, both of Oak Ridge; brothers, Doyle Cole and wife Amy of Powell, Jack Cole and wife Annalee and Gale Cole, both of Big Stone Gap, VA; sister, Brenda Osborne of Middlesboro, KY; sister-in-law, Mary Cole of Big Stone Gap, VA; she was known as “Grannie Barker” to her 5 grandchildren, Nathan McMahan and wife Ashley, Schuyler Barker and Ashley Giar, Carmen Polpanich and Brett Michael Funk; and 6 great grandchildren, Lawson Keith McMahan, Laney Anna McMahan, Derek Michael Funk, Kailey Marie Holland, Rose Polpanich and Devin Polpanich. The family would like to express their appreciation to Thompson Oncology Group, especially Dr. Foust and to NHC Farragut and Covenant Hospice for their care. While at Rehab at NHC Farragut, she was affectionately known as “Sweet Miss Anna.” The family will receive friends on Thursday, August 13, 2015 from 5 – 7pm at Weatherford Mortuary. The funeral will follow at 7pm with Rev. Brian Scott officiating. On Saturday, August 15, 2015, the family will receive friends from 11am – 1pm at Holding Funeral Home (17 E, 3rd St., N.) in Big Stone Gap, VA. Funeral services will be conducted at 1 p.m. in the funeral home chapel with Philip Miller officiating. A graveside service will follow at Riverview Cemetery. In lieu of flowers, the family asks that any memorials be made in her memory to the American Heart Association or the Diabetes Association. An on-line guest book can be signed at www.weatherfordmortuary.com. Holding Funeral Home of Big Stone Gap is in charge of local arrangements.

Oak Ridge, TN/East Stone Gap, VA Anna Ruth Barker, age 90, passed away Monday, August 10, 2015 at her home, where she resided with her daughter Stella, and surrounded by her family. She was born November 29, 1924 in East Stone Gap, Virginia,... View Obituary & Service Information

The family of Mrs. Anna Ruth Barker created this Life Tributes page to make it easy to share your memories.

Send flowers to the Barker family.