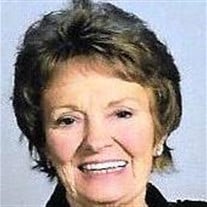 Barbara Creasy Polly, 81, passed away on Friday, March 18th at Holston Valley Medical Center. Born on June 4, 1934, she grew up in Lynchburg, Virginia where she graduated from E.C. Glass High School. She attended Emory & Henry College where she earned a Bachelor of Arts degree and met her future husband, Brownie. Upon graduation and after marrying Brownie, she taught elementary school in Richmond while Brownie attended dental school at MCV. She moved to Big Stone Gap in 1958 and she joined Trinity United Methodist and the chancel choir and became fully immersed in the community. As a member of the Big Stone Gap Music Study Club, she was instrumental in the production of annual Broadway musicals consisting solely of local talent and played the female lead in sixteen productions. In 1964, when the outdoor musical drama “Trail of the Lonesome Pine” began, Barbara played the lead role of June Tolliver for the first five seasons. That began a lifelong relationship with the drama’s parent organization, Lonesome Pine Arts & Crafts, Inc. In 1970 when John Fox Jr.’s sister passed away at the family home in Big Stone Gap, she helped negotiate the purchase of the home and created the John Fox Jr. House & Museum. She became President of Lonesome Pine Arts & Crafts, Inc. and served in that role until recently. In 1967, she was instrumental in chartering a Cub Scout Pack in Big Stone Gap. She remained involved in scouting for 18 years as a Den Mother and a scouting leader eventually receiving the Silver Beaver Award, the highest award in scouting. That Cub Scout Pack continues today. In 1977, Barbara returned to teaching English at Powell Valley High School and instructed the One Act Play team for the next two years. She then left teaching and joined Don Wax Realty and began selling real estate and eventually became a broker. She bought the firm, reorganized it and named it Lonesome Pine Realty, eventually becoming the largest real estate company serving four counties. She was named Realtor of the Year in 1999 for the Southwest Virginia Association of Realtors. She sold the company in 2000. Barbara was the first female President of the Emory & Henry College Alumni Association. In 2003, Barbara was name to the Board of Trustees of Emory & Henry. She was predeceased by a daughter, Tamara Lee Polly, and her parents, Vernon and Ruth Creasy. She is survived by her husband, Dr. Brownie Polly, Jr. She also leaves a sister, Shirley Baber of Lynchburg, Virginia, and a brother, Kenneth Creasy, of Burlington, North Carolina, as well as sons, Brownie E. Polly, III and his wife, Connie, of Roanoke, Virginia; Wesley T. Polly and his wife Lisa, of Big Stone Gap, Virginia; and John V. Polly, of Los Angeles, California. She is also survived by grandchildren, Wesley T. Polly, II, and Colston E. Polly of Big Stone Gap, and Katherine “Kit” Polly and Brownie E. Polly, IV of Roanoke. The family will receive friends from 4-8 on Tuesday, at Trinity United Methodist Church (East First Street S & Wyandotte Ave) in Big Stone Gap. Funeral services will be conducted at 1:00 p.m. on Wednesday at Trinity United Methodist Church in the church sanctuary with the Rev. Terry Goodman officiating. Burial will follow at Powell Valley Memorial Gardens. In lieu of flowers, the family requests that gifts be made to Lonesome Pine Arts & Crafts, Inc., P. O. Box 1976, Big Stone Gap, VA 24219 or a charity of your choice.

The family of Mrs. Barbara C. Polly created this Life Tributes page to make it easy to share your memories.

Send flowers to the Polly family.