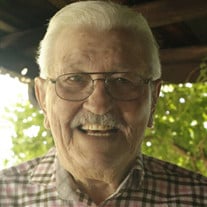 Big Stone Gap, Virginia Billie E. Jones Sr. , 81, went to be with the Lord on Friday (July 18, 2014) at his residence in the Seminary Community in Lee County. He was born July 15, 1933 in Olney Illinois; he was the son of the late Oscar and Grace Jones. Mr. Jones was preceded in death by his parents, and one son; Billy Eugene Jones Jr. Billie was a lifetime member of the V.F. W. post 10298 in Pennington gap; He served in the Marine Corps three dedicated years, where he was a decorated Marine; He served as a Mack Gunner, with the 5th Marines on the 38th Platoon while in combat, February of 1952- until March of 1953; having been awarded the, Korean Service Medal, the United Nations Service Medal, and the National Defense Medal. He was a pillar in the community of Big Stone Gap, where he owned a Barber shop, on Main St. for 43 years. One of his greatest passions was watching his grandchildren in their different sporting events as they grew up. He was a Huge Dale Earnhardt fan, he had a hobby of learning anything about History, and he loved working with wood. He was a loving Father, grandfather, and friend; he will be sorely missed by all that knew him. He is survived by his daughter; Patricia (TRISH), Kay Jones/ Rose, Sandra Hamilton, Sonja Jones, Susie Butler, Julie and (husband) William Parrish, Paul Livesay Jr. his grandchildren; Seth, Sabrina, Christopher, Jarred, Whitney, Jimmy, Kendra, Tanner, Roger, Heather, Tisha, Kristen, Cody, Paul , Amber, Alexia, Mason, Regina, Great Grandkids; Piper 13 other great grandchildren, his special partner; Patricia Livesay, and a host of other close relatives and friends. The family will receive friends for the visitation on (Sunday July 19, 2014) from 5 until 8 p.m for the visitation at Holding Funeral Home in Big Stone Gap Virginia. The funeral service will be conducted following the visitation in the Chapel of Holding Funeral Home with the Rev. Allan Collier officiating The graveside service will be conducted on Monday July 21, 2014 in the Barker Family cemetery in the Rawhide Community of Keokee at 11 a.m. Military Rites will be administered by the Pennington V.F.W. post 10298 Family and friends are asked to meet at Holding Funeral Home on Monday by 10:30 to go in procession to the cemetery. Pallbearers will be; Seth Jones, Christopher Rose, Jarred Rose, William Boggs, Will Parrish, Paul Livesay You may go online to view the obituary, or sign the guest registry at www.holdingfuneralhome.com Holding Funeral Home is honored to serve the Jones family

Big Stone Gap, Virginia Billie E. Jones Sr. , 81, went to be with the Lord on Friday (July 18, 2014) at his residence in the Seminary Community in Lee County. He was born July 15, 1933 in Olney Illinois; he was the son of the late Oscar... View Obituary & Service Information

The family of Billie E. Jones created this Life Tributes page to make it easy to share your memories.

Send flowers to the Jones family.