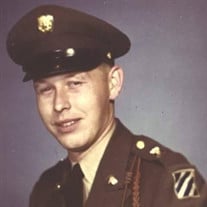 Big Stone Gap, Virginia Bobby (Bob) Taylor, 85, passed away peacefully on Tuesday, June 16, 2020 at Johnson City Medical Center. Bob was born in Wise County Virginia, the son of the late Claude & Eunice (Estep) Taylor. Bob served his country honorably, in the United States Army. He achieved the rank of Corporal. He was a member of the Big Stone Gap Fire Dept. He was a true christian father. He instilled in his sons a "biblical raising", one by which he diligently taught them by his example; how a man should conduct himself and how to treat others. He enjoyed his family, and working in his garden. He will be sorely missed by all his close friends, and family. In addition to his parents, he was preceded in death by his wife, Shirley Taylor, his brothers; Jimmy "Pete" Taylor, Kenneth "Rod" Taylor, and his twin, Gerald Taylor. He is survived by his two sons; Jeff Taylor & fiance' Terry Holbrook, Chris Taylor & fiance'Teresa Cansler, his sister, Phyllis Feerer & husband Jim, his fiance' Pina Stewart, several adopted grandchildren, close classmates, and friends. The family will receive friends on Friday, June 19, 2020 from 5 p.m. until 7p.m. for the visitation at Holding Funeral Home in Big Stone Gap, VA. The funeral service will be conducted on Saturday, June 20, 2020 in Holding Funeral Home's chapel at 1 p.m. with Jack Clark officiating. Special music will be provided for the family by; several talented singers. The committal service will be held following in Powell Valley Memorial Gardens, the local V.F.W. and D.A.V. groups will be providing Military Honors. Family and friends will serve as pallbearers. You may go online to view the arrangements, sign the guest registry, or leave the family a condolence at www.holdingfuneralhome.com Holding Funeral Home of Big Stone Gap is serving the family of Mr. Taylor.

The family of Bobby (Bob) Taylor created this Life Tributes page to make it easy to share your memories.

Send flowers to the Taylor family.