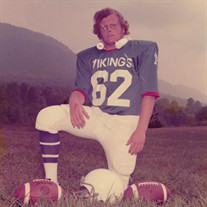 Big Stone Gap, Virginia  Calverne "Butch" Lyke, 62, passed away on Tuesday, Sept. 14, 2021 at Holston Valley Medical Center. Butch was born in Roanoke, VA., the son of; Calverne "Curly" Lyke and Margie (Bailey). In his youth he attended school in Vinton, VA., Once the family moved to Big Stone Gap, he attended and graduated from Powell Valley High School. While in High School, Butch played football for the Vikings, where he made several impactful plays. He also made several friendships that have lasted a lifetime. Over his lifetime he had many memorable events and hobbies. He enjoyed fishing with his father & cousin David Williams, where they usually targeted Striper. This "Fishing" time they spent together was a special occasion for them. He was a N.F.L. sportsfan that enjoyed watching teams compete. He devoloped an interest for Parachuting, based upon his father's service in the 82nd airborne. This interest led to him pursuing his own parachute jump in Roanoke, VA. His abilities to draw were remarkable. He was instrumental in his children's lives by helping to coach them in Little League. He traveled to Vegas often to participate in trade shows. All of his passions & abilities serve to memorialize his life. He will be missed by his family and friends. He was preceded in death by his maternal grandparents Robert and Opal Bailey, paternal grandparents, Vernon and Dorothy Lyke, mother of his daughter, Teresa Darlene Ball, cousins; Timmy Williams & Barry Williams. He is survived by his parents; Calverne "Curly" Lyke & Margie Lyke of Big Stone Gap, VA., his sister; Cynthia Lyke McKeever of Reedsville, VA., children; Crystal Shante' Lyke of Big Stone Gap, VA., Joshua Thomas Lyke of Big Stone Gap, VA., Leannza Larrimore Gill & husband Ephraim "Kai" of Ft. Dix, New Jersey, nephew, Jesse Lyke McKeever & wife Valeecia of Oklahoma,great niece Aurora Jo McKeever, his fiance' Kay Sturgill, and granddaughter Jill Sturgill, other close relatives and friends. The services will be private. He will be laid to rest in Powell Valley Memorial Gardens. Pallbearers will be: Kai Gill, Jesse Mckeever, Barry Hamler, Joshua Lyke, Leannza Gill. Honorary will be, Chuck Horton. A memorial video has been created for family and friends at: https://www.tributeslides.com/tributes/show/HHL5GMPHDZ938QRG On online register is available for the Lyke family at www.holdingfuneralhome.com Holding Funeral Home is honored to serve the Lyke family.

The family of Calverne "Butch" Lyke created this Life Tributes page to make it easy to share your memories.

Send flowers to the Lyke family.