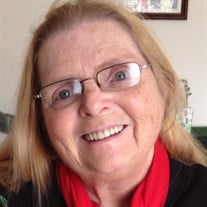 “Tina” Vandergriff Fairfax, VA/Big Stone Gap, VA Cecil Earnestine “Tina” Rowland Vandergriff, 72, passed away on Sunday, December 11, 2016. Tina was born and raised in Appalachia, VA and was a 1962 graduate of Appalachia High School, where she was a cheerleader. She lived in Appalachia, VA until her marriage to Charles Don Vandergriff in 1962 and then resided in Big Stone Gap, VA. Tina received an Associate Degree from Mountain Empire Community College. She worked at Lonesome Pine Hospital as the Business Office Manager and later worked in Physical Therapy at Wellmont Lonesome Pine Hospital. In 2007, she moved to Fairfax, VA to be with family and resided there until her death. In her youth, Tina was a member of the Appalachia United Methodist Church and then became a member of East Stone Gap Baptist Church, where she served as a Sunday School Teacher and a youth leader. She was a member of the Women’s Missionary Union. She loved and served her church faithfully. Tina was an active Master Gardner, providing community events and services to provide education related to the Master Gardner program. She was also an original founding member of Mountain Empire Community College’s Home Crafts Days. Tina cherished her family and was preceded in death by her mother, Carrie Lee Rowland Carter, her father, Cecil Earnest Rowland, her brother, Gary Evans Rowland and her sister, Joyce Ann Rowland Witt. She is survived by Charles Don Vandergriff (Fairfax, VA), her son, John Vandergriff and wife Gay Donna (Glenn Allen, VA) and her daughter, Cindy Vandergriff and Keith Tracy Simpson (Fairfax, VA); two sisters, Betty Sue Rowland Pelicano (Cleveland, Ohio) and Linda Gay Rowland Conrad and husband, Paul (Massachusetts); grandchildren, Abigail Vandergriff and Shelby Vandergriff (Glenn Allen, VA). Special thanks for the love and care provided by her friend and caregiver, Sabina Phillips. She is also survived by a host of loving extended family and friends. The family will receive friends at Holding Funeral Home on Thursday, December 15 from 5:00 p.m. until 7:00 p.m. Funeral Services will be held on Friday, December 16 at Holding Funeral Home at 1:30 p.m. and burial will follow at Powell Valley Memorial Gardens. Services will be officiated by Reverend Bobby Hamilton. Family and friends will serve as pall bearers. To view the obituary online and offer condolences, please visit www.holdingfuneralhome.com. Holding Funeral Home is serving the Vandergriff family.

The family of Cecil Earnestine "Tina" Vandergriff created this Life Tributes page to make it easy to share your memories.

Send flowers to the Vandergriff family.