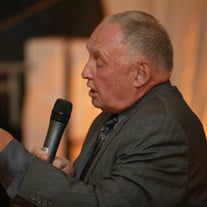 Big Stone Gap, Virginia Dr. Jozsef Hunek, 78, passed away peacefully on Tuesday (Oct 2, 2018) at his home with his loving family by his side. Dr. Hunek was born on Aug 2, 1940 in Budapest, Hungary. He was the eldest of three children. He attended the Technical University of Budapest, where he earned his Doctorate degree in Chemical Engineering. He began his five decades long teaching profession as Associate Professor of Chemical Engineering at the same University. He married the love of his life, Judy Hunek, on Sept 15, 1966; out of their union they were blessed with two sons. Balazs Hunek, who followed in his father’s footsteps, earned his Ph.D. in Chemical Engineering at the University of Minnesota, Twin Cities. Marton Hunek, who followed his father’s advice and his grandfather’s footsteps, entered the world of business, graduating from the prestigious INSEAD in France earning his MBA. Dr. Hunek moved to the United States in 1995 as an exchange professor of Chemistry at the Brevard Community College in Florida. He moved to Wise County, Virginia in 2004, where he was running the Chemistry Department at Mountain Empire Community College until his retirement in 2016. He was a member of the Big Stone Gap Masonic Lodge # 208 AF & AM, where he was twice Master of the Lodge. He was a member of the Sacred Heart Catholic Church in Big Stone Gap. Dr. Hunek was an owl enthusiast and an avid world traveler, who visited numerous destinations around the globe with his family. Most recently he truly enjoyed his many trips to Alaska. Throughout his blessed life, he was devoted to helping his entire family,his friends, and all of his students to reach their full potential as strongly contributing members of society. Survived by his wife Judy Hunek of the Home, two sons Balazs Hunek wife Tara of Chicago IL, Marton Hunek wife Laure of Paris France, eight grandchildren 4 boys, and four girls; sisters Klara and Maria of Hungary. The family will receive friends on Saturday (Oct 6, 2018) at Sacred Heart Catholic Church in Big Stone Gap from 9:30 a.m. until 11:00 a.m. Mass service will be conducted following the visitation with Father Daniel Kelly officiating, masonic rites will be administered by the local masons. Burial will be private. In lieu of flowers the family would like you to donate in Dr. Hunek's honor to the local Mason Lodge #208 AM &FM 121 East 5th St S. BIG STONE GAP VA, 24219 You may go online to view the obituary, sign the guest registry, or leave the family a condolence at www.holdingfuneralhome.com Holding Funeral Home is serving Dr. Hunek’s family.

Big Stone Gap, Virginia Dr. Jozsef Hunek, 78, passed away peacefully on Tuesday (Oct 2, 2018) at his home with his loving family by his side. Dr. Hunek was born on Aug 2, 1940 in Budapest, Hungary. He was the eldest of three children. He attended... View Obituary & Service Information

The family of Dr. Jozsef Hunek created this Life Tributes page to make it easy to share your memories.

Send flowers to the Hunek family.