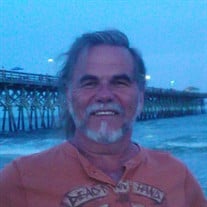 Dryden, VA Gerald Lynn Newton, 68, of Dryden, VA, ran into the arms of Jesus on Thursday, September 30th , 2021 with his family by his side. Gerald was born on September 10th , 1953, at Lee General Hospital in Pennington Gap, VA to John Paul & Hattie Cleyo Newton. He was the oldest of their 10 children. Gerald, a retired coal-miner of over 40 years, was a hard-working, kind-hearted man, who always provided for his family. His strong work ethic remained with him throughout his life. Gerald, along with the mother of his children, Mary Mosley Newton of Dryden, VA, raised 3 remarkable children, Jared, Bradley, and Stacie. His children meant more to him than anything, something he proudly and often mentioned. Gerald was a strong, kind, and loving father, grand-father, and friend to many. Throughout his life, Gerald remained an avid hunter and skilled fisherman. He enjoyed being outdoors in his garden or with his farm animals. He had a talent for carpentry and mechanics. He was a jack of all trades. Gerald was a member of The First United Methodist Church in Jonesville, VA. Gerald was preceded in death by his parents, John Paul and Hattie Cleyo, his sister Colleen, and 2 brothers, John Quinton and Michael Joe. Gerald leaves behind his 3 children, their spouses, and 5 beautiful grandchildren: Jared and Tara Newton, of Jonesville, and their sons, Case and Riot, Bradley and Sammi Newton, of Jonesville, and their daughter Harper, Jesse and Stacie Wilson, of Duffield, and their daughters Brooklyn and Brynlee. Gerald is also survived by his 3 brothers, Paul Eddie “Fig” Newton, Kenneth Newton, and Daryl Newton, 3 sisters, Thelma Welch, Alice Quiet, and Stephanie Newton, one special nephew, BJ Welch, special friend, Teresa Kennedy, best friends, Lee Cooper and Mike Bledsoe, and several nieces, nephews, family, and beloved friends. The family will receive friends on Monday, Oct. 4, 2021 from 5-7 p.m. for the visitation at Holding Funeral Home, the funeral service will be conducted following in the funeral home's chapel with, Pastor Layne Pennington officiating. The committal service will be held on Tuesday, Oct. 5, in Glencoe Mausoleum at 11 a.m., those wishing to attend are asked to meet at the funeral home by 10:30 to travel in procession. Pallbearers will be family and friends. A memorial video has been created for family and friends at: https://www.tributeslides.com/tributes/show/5K6GT7ZL34HDZ5B9 An online register is available for the family at www.holdingfuneralhome.com Holding Funeral Home is in charge of the arrangements.

Dryden, VA Gerald Lynn Newton, 68, of Dryden, VA, ran into the arms of Jesus on Thursday, September 30th , 2021 with his family by his side. Gerald was born on September 10th , 1953, at Lee General Hospital in Pennington Gap, VA to John Paul... View Obituary & Service Information

The family of Gerald Lynn Newton created this Life Tributes page to make it easy to share your memories.

Send flowers to the Newton family.