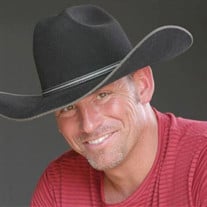 Madison, WI/Appalachia, VA James T. “Snuffy” Smith, 53, of Madison passed away unexpectedly on Wednesday, March 15, 2017. He was born on December 28, 1963, in Appalachia, VA, the son of the late Herbert and Joyce (Bledsoe) Smith. Given the nickname “Snuffy” by the maternity nurse at the hospital where he was born, James T. Smith legally changed his name as a teenager to the name his father loved and everyone had come to know him by. For those who knew him, his name was very fitting due to his over the top personality and humor, as well as a contagious laugh and smile. Snuffy was a man of many talents. However, he was most well-known for his music, which was his passion. He began his career at an early age, singing in church. Although life would lead him into a career in the financial industry, music was always his consoling friend. Some of his musical accomplishments included the hit “If You Could Only Believe” which maintained a number one position on the CCMA Chart and was named a finalist for the CCMA Christian Country Male “Vocalist of the Year” award in 2000. He was also well known in the Madison music scene performing regularly as a soloist as well as with the Clyde Stubblefield All-Stars and the Bad Daddies. Although music was his true calling, he found success as a sales entrepreneur in the financial industry. Snuffy could sell you the shirt off your back without you knowing it. He told the most animated stories and even if you had heard it before, you would listen again because it got funnier each time. He was preceded in death by his parents, Herbert and Joyce Smith and his sister, Pam Smith. Snuffy is survived by the loves of his life, his children, Desiree (Kristofer) Canto, Shea (Sam Plasman), Grant, Caleb, Priscilla and Wyatt Smith; his grandchild Landyn Canto; his wife Yvette Smith; ex-wife Robin (Chuck Weiss) Clisso; siblings, Priscilla Acevedo, Jeffrey Davis and Herbert Smith; and nephew, Alexander Acevedo. Services in Wisconsin are being conducted on Monday, March 20th in Brodhead, WI at the Newcomer Funeral Home. The viewing will take place on Wednesday, March 22nd from 5 pm to 7 pm at Holding Funeral Home (17 E. 3rd St, N) in Big Stone Gap, VA. The funeral will be held at 1 pm on Thursday, March 23rd at First Baptist Church, Appalachia, Va., with Dr. Nick Brewer officiating. Burial will follow in Powell Valley Memorial Gardens in Big Stone Gap, VA. To view the obituary online and offer condolences, please visit www.holdingfuneralhome.com. Holding Funeral Home of Big Stone Gap, VA is serving Snuffy Smith’s family.

The family of James T. "Snuffy" Smith created this Life Tributes page to make it easy to share your memories.

Send flowers to the Smith family.