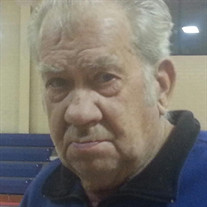 Big Stone Gap, Virginia Jimmy Ray McGee “ Magie”79, passed away unexpectedly on Saturday (April 4, 2015) at his residence in the Wildcat Community of Big Stone Gap. He was born in Appalachia Virginia in 1936, the son of the late ;George and Lillian ‘Dockery” McGee. He worked in Washington D.C. in his early life, where he drew specialized blueprints, for the Federal Government, and the Central Intelligence Agency. He worked for Westmoreland coal company, he was a manager of a Kroger Grocery store, in Kingsport TN for 15 years. In his later years he was a custom home builder in Wise County, Virginia. He was of the Christian Faith and attended the New Hope Assembly of God church. He enjoyed watching Nascar his favorite driver was “Dale Earnhardt Jr.” He was a Republican. He was preceded in death by his parents; George and Lillian McGee, one brother Marvin McGee. He is survived by his five children; ,Deborah and husband Michael Brown of Kingsport TN, Teresa Lovell of Big Stone Gap, Lisa Wilder and husband Tony of Big Stone Gap, Jennifer and husband David Bowen of Big Stone Gap, Belinda Mellon of Andover, Thelma Phillips their mother, Grandchildren; Steven Chandler, Joshua Wilder, Natasha Bowen, Alicia Lovell, Brittany Wilder, Autumn Bowen, Rachel Lovell, Katlyn Bowen, Hannah Bowen, Landon Mellon; Great Grandchildren; Miciah Boggs, Infinity Wilder, Paizlee Belcher, Gage and Gracie Chandler, other close relatives and friends. The family will receive friends on Monday (April 6th) from 12 noon until 2 p.m. for the visitation at Holding Funeral Home of Big Stone Gap (17 E. 3rd St. N.) The funeral service will be conducted following the visitation in the funeral home chapel with the pastor, Rick Whitten officiating. The committal service will follow in the American Legion Cemetery. The family will serve as pallbearers. In lieu of flowers you may make a donation to the local P.A.W.S. organization in Southwest Virginia. You may go online to view the obituary, sign the guest registry, or leave the family a condolence at www.holdingfuneralhome.com Arrangements have been entrusted to Holding Funeral Home.

Big Stone Gap, Virginia Jimmy Ray McGee &#8220; Magie&#8221;79, passed away unexpectedly on Saturday (April 4, 2015) at his residence in the Wildcat Community of Big Stone Gap. He was born in Appalachia Virginia in 1936, the son of the late... View Obituary & Service Information

The family of Jimmy Ray McGee created this Life Tributes page to make it easy to share your memories.

Send flowers to the McGee family.