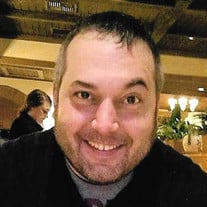 Nashville Tennessee, Jonathan Paul Dingus “Paco” 40 passed away unexpectedly at his residence, on Sunday, February 7, 2016 in Nashville TN. He leaves behind his mother, Debroah “Debby” Collier, Stepfather, Charlie Dyer, his sister, Nicole Dingus “Coco”, and her fiancé, Tony Furstnau, his niece, Karah Dingus, and his nephew, Isaiah Furstnau, his son, Keaton Browning, his paternal Grandfather, John Dingus, his aunts, Melissa Marcum, Darlene Dingus, his Goldie Group family; Bruce Goldie, Kenny Goldie, Jason Goldie, Mike Patterson, and his beloved dog, Biscuit, and all his beloved friends and coworkers he’s touched in his professional and personal life. He is preceded in death by his father, Donnie Dingus, his brother, Matthew Dingus, his maternal Grandparents, Pete and Opal Chandler, and his paternal Grandmother, Jeweleen Dingus. Jonathan, a 1993 graduate of Powell Valley High School, excelled in academics and athletics and was a member of the baseball, football and golf teams. He graduated Eastern Tennessee State University with a degree in Public Relations. He enjoyed working as a sports writer for E.S.P.N., The Kingsport Times, and Bristol Herald Courier early in his career. He was instrumental in bringing Crutchfield to Southwest Virginia. After that, he was an investment banker for several years at Edward Jones Financial. A career in the cellular and wireless industries was realized next as he worked at Sprint and Touchstone Wireless until it was sold. Jonathan was hired as a Director for the Goldie Group in Massachusetts and he moved north to the Boston area for work. Two years ago, Jonathan, moved back to the south and lived and worked in Nashville, Tennessee, where he helped the Goldie’s open up Electronics Renewal, a cellular service and repair center. He was instrumental in the startup and growth of this new company, overseeing purchasing and sourcing with great pride. During the past 10 years of Jonathan life, he formed an extremely close working and personal relationship with the Goldie Family. Bruce Goldie, C.E.O., was not just his boss, rather he was an admired mentor and adored father figure to Jonathan. He was an integral part of the Goldie family and their business. The bond that he developed with his Goldie brothers; Kenny and Jason and his other Goldie Group brother, Mike Patterson, was a great source of happiness to Jonathan. His dog Biscuit, his closest companion over the years always kept the smile on Jonathon’s face when they were together. Jonathan was a friend to everyone he met and a shining light and a ray of hope for his family’s life. He will be deeply missed by all that had the great pleasure of knowing him. The family will receive friends on Saturday (Feb 13) from 11 to 1 p.m. at Holding Funeral Home (17 E. 3rd St. N.) for the visitation. The funeral service will be conducted following the visitation in the funeral home’s chapel with the Rev. Michael Dalton officiating. Glimpse of Grace will provide the music for the service. The committal service will take place in the Dingus family cemetery in Coeburn Virginia. Family and friends will serve as pallbearers. You may go online to view the obituary, sign the guest registry, offer condolences, or order flowers at www.holdingfuneralhome.com Holding Funeral Home of Big Stone Gap, is honored to serve the family of Mr. Dingus.

The family of Jonathan Paul Dingus "Paco" created this Life Tributes page to make it easy to share your memories.