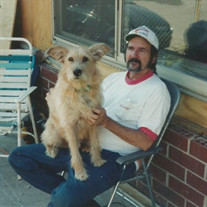 Big Stone Gap, Virginia Joseph Davis Sturgile,65, passed away on Sunday (July 27, 2014) at Heritage Hall nursing home in Big Stone Gap Virginia. Joseph Sturgile, was born in Shreveport LA, he was the son of the late Albert and Dicie (Davis) Sturgile, he had been a resident of Big Stone Gap since 1971.He was a member of the United States Marine Corps. Where he served his country honorably and defended his fellowman. He was preceded in death by his parents; one brother; Milton Edward Barnes, one stepson; Jerry Owens and one sister ;Verna Lee Sturgile. He is survived by his daughter; Charles Stephanie(Charlie) Owens, of Asheville N.C. one son; Chris Sturgile of Gate City Virginia,three stepdaughters; Anita Wilkenson of Big Stone Gap, Hope Booher of Bluff City TN, and Megan Sturgile, Grandchildren; Anthony, and Wesley Sturgile, Tyler and Stacy Leonard, Sarah Victoria and Mark David Jones, Julia and Anthony Owens, special friends Joe and Judy Miller of Norton. The family will receive friends on Wednesday (July 30, 2014) from 5 until 6 p.m. for the visitation at Holding Funeral Home (17. E. 3rd St. N) The funeral service will be conducted; following the visitation, in the funeral home’s chapel; with the Pastors Greg Townsend, and Ronnie Mutter officiating. Special music will be provided by the; Glimpse of Grace singing quartet. The graveside service will be conducted on Thursday (July 31, 2014) in the Glencoe cemetery at 10 a.m. Military Rites will be administered by the honorable; Local V.F.W. And D. A.V. Post John Fox Jr. VFW 5715, Norton Post 4301, Coeburn 8652. Family and Friends will meet at the cemetery by 10:00 a.m. for the committal service. Memorial contributions in honor of Mr. Joseph Sturgile, may be made to the Mountain Empire PACE participants’ “Christmas Fund.” P.O. Box 888, Big Stone Gap VA 24219” Joes later years were much enriched by the friends that he made at P.A.C.E. You may go online to offer your condolences at www.holdingfuneralhome.com Holding Funeral Home is serving the Sturgile family.

The family of Joseph Davis Sturgile created this Life Tributes page to make it easy to share your memories.

Send flowers to the Sturgile family.