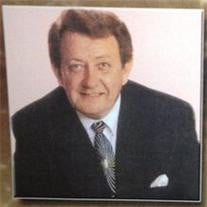 East Stone Gap, VA Lowell Harold Gilley, 71, passed away on Tuesday (July 2. 2013) at his home with his family by his side. Harold was an accomplished gospel singer. He was a chaplain at Norton Community Hospital. Harold was an ordained minister. He spent his life serving the Lord and always helping, and giving to other people. He was a member of the Palmetto State Quartet. His legacy has been memorialized in a museum in Dollywood, TN. He was preceded in death by his father, Glen H. Gilley; his mother, Ella Gilley; two brothers, Leonard Gilley and Wayne Gilley. He is survived by wife, Betty, of the home; three sons, Bryan Gilley of Norton , Tim Gilley and wife Tina of East Stone Gap, VA, and Steve Gilley of Connersville IN; two grandsons, Cody Gilley and Seth Huffman; three granddaughters, Whitney Gilley , Jessica Miles, Hayden Huffman; one brother, John Gilley of East Stone Gap; and a host of very close relatives and friends. The family will receive friends at Holding Funeral Home (17. E. 3rd St. N) on Saturday (July 6, 2013) from 4 until 8 p.m. The funeral service will be conducted following the visitation in the funeral home chapel with Curtis Rowland, Carlton Rowell and Melvin Eads officiating. The graveside service will be conducted on Sunday (July 6, 2013) at 10:00 a.m. in the Gilley Family Cemetery. Those wishing to attend the graveside service are asked to meet at the funeral home at 9:30 a.m. on Sunday to go in procession to the cemetery. Pallbearers will be: Tim Gilley, Bryan Gilley, Tony Gilley, Marty Gilley, Shane Gibson, and Todd Dalton. In lieu of flowers, donations in memory of Harold may be made to the Soul Harvest Children Fund, c/o Powell Valley National Bank, 228 E. 5th St., S., Big Stone Gap, VA 24219 or at any local branch. You may go online to view the obituary and sign the guest registry at www.holdingfuneralhome.com Holding Funeral Home is honored to serve the family of Mr. Gilley .

East Stone Gap, VA Lowell Harold Gilley, 71, passed away on Tuesday (July 2. 2013) at his home with his family by his side. Harold was an accomplished gospel singer. He was a chaplain at Norton Community Hospital. Harold was an ordained minister.... View Obituary & Service Information

The family of Lowell Harold Gilley created this Life Tributes page to make it easy to share your memories.

Send flowers to the Gilley family.