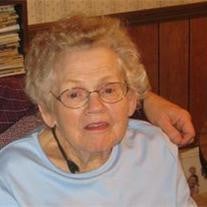 (Big Stone Gap VA, Huntsville Al) Marion Wright Smith died at age 92 in Huntsville, AL on December 24, 2011. Mrs. Smith was born on May 27, 1919 in Big Stone Gap, Virginia, the daughter of Reverend James Miller Smith and Katherine Carter Barham Smith and she grew up in Big Stone Gap where her father's entire ministry was in the Presbyterian mission field in Southwestern Virginia. She graduated from Wilson College in Chambersburg, Pennsylvania in 1940 with an AB degree in Mathematics and Music and completed post graduate courses at The University of Alabama. During World War II, she taught at John's Island High School in Charleston, SC. While living in Burlington, VT she served as Assistant Organist and the organist for the youth choir of the First Congregational Church in Burlington; after moving to Tuscaloosa, AL in 1951, she taught Mathematics for many years initially at the Tuscaloosa High School and later at The University of Alabama. Mrs. Smith had a strong love of family, the church, music and teaching. As an active member of the First Presbyterian Church in Tuscaloosa, she was an Elder, Deacon, Sunday School Teacher, Circle Bible Moderator, Treasurer of the Presbyterian Women, and member of the Finance Committee, the Budget and Funding Committee, and the Christian Education Committee. She was also active in DAR, DAC, P.E.O. Sisterhood Chapters ALI and ALM, Modern Culture Club, University Women, and Friends of the Library. Mrs. Smith was preceded in death by her husband, Dr. Donald Foss Smith, and her brother, Dr. James Miller Smith, Jr. of Boulder, CO; she is survived by her daughter, Marion S. Bishop (Charlie) of Huntsville, Al and her son, Donald Foss Smith, Jr. (Margaret) of Fairplay, CO, four grandchildren, Susan Bishop Page, Donald F. Smith, III, Kathryn M. Smith, and Christopher L. Smith and four great grandchildren, Gavin Price Smith, Daniel Iverson Smith, Mallory Jean Smith, and Hannah Margaret Smith. A visitation will take place in Holding Funeral Home's chapel on December 28, 2011 from 12:30 p.m. until 1:30 p.m. The funeral service will be conducted following the visitation with the Rev. Tony Palubicki officiating. Graveside services will follow in Glencoe Cemetery in Big Stone Gap Holding Funeral Home of Big Stone Gap VA is honored to serve the Smith Family. In lieu of flowers, the family requests that contributions be made to the Presbyterian Home for Children in Talladega, AL, the Christian Appalachian Project, Lancaster, KY or the Donald F. Smith Memorial Endowed Scholarship in Chemistry in the College of Arts and Science at The University of Alabama.

The family of Marion Smith created this Life Tributes page to make it easy to share your memories.

Send flowers to the Smith family.