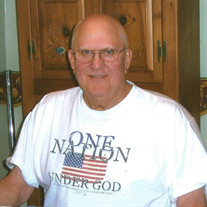 Appalachia, Virginia. Melvyn Wayne Eads 76, passed from this earth into paradise on Saturday (April 25, 2015) at Johnson City Medical Center. Melvyn was born and raised in Derby, Virginia. He was the son of the late; Claude “Homebrew” and Mabel Eads. He had a very active life in which he held many different job titles and responsibilities. He and Avanell married at a young age and moved to Chicago, where he worked for a Sheet metal fabrication company, he then received training to become a paramedic. After a short while of living in Chicago, the family headed home to Southwest Virginia where they would live the rest of their lives. While in Southwest VA, Melvyn and Brother in Law William “Bill” Seabolt worked in the mines together, after many years of a family/partnership the two opened up Seavyn Coal Company; where they became coal operators in the joint venture. Melvyn had great pride in the town of Appalachia; he was always an enthusiastic supporter of the athletics department. He also was instrumental in building the Press box at Riggs stadium; he was the past President of the Sports association, and in his later years could be found working the concession stand at almost all Appalachia's sporting events. Melvyn owned and operated a monument company in Big Stone Gap for many years. He graduated from Liberty University with a bachelor’s degree in Theology and joined the ministry. He was a member of the First Missionary Baptist Church where he served in a pastoral role alongside his good friend Don Childress. He was preceded in death by his parents Claude “Homebrew and Mabel Eads, his daughter Nancy Eads, one brother Howard Ray Doyle. He is survived by wife Avanell Eads of the home, daughter Tammy Kilgore husband Harmon of Poplar Hill in Big Stone Gap, his brother Jimmy Doyle and wife Della of Kingsport TN, sister Una Fay and husband Dr. Michael Ford of East Stone Gap, grandchildren; Sammy Belcher Jr. and Melvyn Wade Belcher and Natasha Bowen, two great grandchildren that he truly loved; Aidan Belcher and Paizlee Belcher; Sister in Laws; Betty Mathieson and husband Bill, and Linda Cooper and husband Sid , special brother in laws, Felix W. Acosta and William “Bill” Seabolt ;special friend and honorary daughter; April Baker and a host of other close relatives and friends. The family will receive friends on Tuesday (April 28) from 5pm until 7pm for the visitation at Holding Funeral Home of Big Stone Gap. The funeral service will be conducted following the visitation with the Pastors; Don Childress, and Harmon Kilgore Officiating. Special music will be provided by Jimmy Garrison and Tracy Doyle Kress. The committal service will be held on Wednesday (April 29) at 11:00 am in the American Legion Cemetery. Those wishing to attend the committal are asked to meet at the funeral home by 10:30 to go in procession to the cemetery. Pallbearers will be; Sammy and Wade Belcher, Bill Seabolt, Robbie Seabolt, John Clark, and Randy Hollinger. You may go online to view the obituary or sign the guest registry at www.holdingfuneralhome.com Holding Funeral Home of Big Stone Gap is in charge of the arrangements.

Appalachia, Virginia. Melvyn Wayne Eads 76, passed from this earth into paradise on Saturday (April 25, 2015) at Johnson City Medical Center. Melvyn was born and raised in Derby, Virginia. He was the son of the late; Claude &#8220;Homebrew&#8221;... View Obituary & Service Information

The family of Mr. Melvyn Wayne Eads created this Life Tributes page to make it easy to share your memories.

Melvyn Wayne Eads 76, passed from this...

Send flowers to the Eads family.