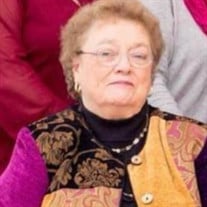 Big Stone Gap, Virginia Sara Nita Holding Wilson-79, gained her heavenly home on Wednesday, March 9, 2022, at Holston Valley Medical Center. Nita was born in Appalachia Virginia, the daughter of the late William I. Holding and Phyllis (Large) Holding. She attended High School in Big Stone Gap; she was in the first graduating class of Powell Valley High School. After graduating, she attended the M.C.V. college where she earned her degree in Medical Technology. While in college she began receiving letters from her dear friend, Marvin Blake Wilson Jr., for whom she had harbored a lifelong crush. During this time, Blake had enlisted in the United States Air Force. Those letters of affection led to a formal courtship, then a marriage that was a lifelong partnership and love story. After Blake returned from the Air Force, he and Nita began their civilian lives together. While the young couple finalized their educations, and their careers began with Blake’s employment with the Dupont Corporation and Nita’s work as a medical technologist, the marriage began to grow. They welcomed their first daughter Laura Elaine Wilson- Riebe in Wilmington Delaware, soon after, they welcomed their second daughter, Sara Anne Wilson-Hale. After Nita’s mother’s passing here in Big Stone Gap, the decision was made to return to run the family’s business - Holding Funeral Home. Once back in her beloved Big Stone Gap, Nita began to flourish. She was active in several different community organizations, including the Community Chorale. She was a member of the Big Stone Gap Baptist Church, and later the Big Stone Gap Presbyterian Church. Soon after their return, they welcomed their third daughter, Amy Dawn Wilson-Davidson, and their fourth daughter, Megan Blake Wilson- Powers. Nita's life was complete, all she had ever wanted was to be a wife and mother, both of which she excelled. Her days were filled with love and dedication to her family. Nita was a wonderful mother to her children, and a dedicated wife to her husband. She was often considered a sort of “den mother” to all her children’s friends and social groups, especially the Powell Valley High School concert choir. She loved to sing, and nurtured her love of music in all her girls. Nita was a wonderful friend and conversationalist, and would share stories about her family with anyone with whom she felt a kinship. Over the years Nita developed and nurtured many lifelong friends. She was a true “Friend for Life". Many of her most cherished memories were of the great adventures she and her friends shared - either while traveling together all over the United States, or with other families on vacations. She would make it a point to travel sometimes long distances to maintain these friendships throughout the years. She especially loved her trips to Atlanta to see her best friend Susan. As her life journeyed further, she was very proud of all her children and grandchildren. She took great pride in their accomplishments and achievements. Her grandchildren brought Nita so much joy, fun times, and memories. She cherished each one and would do anything she could to spend time with them and share special occasions. Holidays, especially Christmas and Thanksgiving, were times in which Nita would spend hours preparing family meals for the annual gatherings of her family. Nita made a lasting impact on each one of her children, grandchildren, and friends. The gravity of her loss will never truly be understood, and we will all certainly be looking forward to the day we are reunited in Heaven. Nita was a devoted Christian, and for us, that brings great comfort in knowing that we will be reunited in our Everlasting Home. We will miss her deeply, but rejoice in knowing she is waiting for us, whole and well and blissful. Nita will be remembered as a great philanthropist and friend, but her greatest accomplishment was having a loving, dedicated, and loyal family. In addition to her parents, she was preceded in death by her brothers; James H. Holding, William I. Holding III, her in-laws, Marvin Blake Wilson Sr. and Virginia Wilson, her dearest friends Susan Daugherty, Jane Stone, and Rita Rankin, and niece Michelle Holding. Nita is survived by her husband of 56 years, Marvin Blake Wilson Jr. ; daughters Laura Wilson Riebe (Michael), Sara Wilson Hale (Travis), Amy Wilson Davidson (John), Megan Wilson Powers (Steven); grandchildren Sydney Budysheva (Igor), Courtney Skeen, Brody Hale, Tyler Skeen, Zoey Hale, Ashley Skeen, Megan Davidson, Faith Riebe, Luke Riebe, Bella Leonard; her unborn great- granddaughter Everlee, her sisters-in-law Patricia Ruyle & family and Terry Holding & family, as well as other close loyal friends. The family will receive friends on Sunday, March 13, 2022 from 2 to 5 p.m. at Holding Funeral Home in Big Stone Gap, for the visitation. The funeral service will be conducted following in the funeral home’s chapel with Darlene Litton officiating, special music will be provided by Jared Glass, and Leonce Hall. The committal service will be held on Monday, March 14, 2022 at 11:00 a.m. in Glencoe Cemetery, those wishing to attend are asked to meet at the funeral home at 10:30 a.m. to go in procession to the cemetery. Family and friends will serve as pallbearers. A memorial video has been created for family and friends at: https://www.tributeslides.com/tributes/show/SK62N284PBTD8ZBP An online registry is available for the family at www.holdingfuneralhome.com Holding Funeral Home is honored to be serving the family of Nita Wilson.

The family of Nita Holding Wilson created this Life Tributes page to make it easy to share your memories.

Send flowers to the Wilson family.