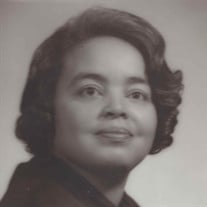 Fayetteville, NC Odessa Mae Bailey Livingston, age 77, a longtime resident of Fayetteville, N.C., passed away on Tuesday, February 21, 2017. Odessa was born in Gainesville, TX and at a young age moved to Pecos, Texas, where she graduated high school at the age of 16. Odessa married the love of her life, William Edward (Billy) Livingston, in 1963 at El Paso, TX. Once becoming an Army wife she moved with him and their daughter, Jackie, as Billy traveled the world on various military assignments. After Bill's retirement from active duty, he followed Odessa on multiple assignments to further her career as a Department of Army Human Resource Officer. Mrs Livingston retired in 1996, at Ft. Monmouth, NJ after serving 32 years as a dedicated civil servant. Odessa was an excellent seamstress, cook, and loved music. She was a kind and caring woman, wife, and mother who helped others whenever she could. She could be firm in demeanor but dole out sage advice and a hearty laugh all at the same time. As such, Odessa was beloved by many of whom lives she touched. She was a proud “preacher’s kid” who loved her father with all her heart; one who respected his wishes until the day he died. Odessa had only one child, a daughter, Jackie. The two of them shared a special relationship and more importantly a loving friendship, living close by one another w/ almost daily visits until the very end. Odessa was predeceased by her parents, Reverend Lon Bailey and Estella Kemp Bailey, siblings: Harvel Bailey, Everett Davis, Jeweline Presley Mays, and Milford Bailey. Odessa is survived by her husband, William Edward (Billy) Livingston (US Army, Retired), her daughter & son-in-law, Jacquelyn & Darryl Thomas of Fayetteville, NC, her brother, Leonard Bailey of El Paso, TX, and sister, Marilyn Bailey of Austin, TX, and dozens of nieces and nephews throughout the U.S.. Friends may call from 12 noon to 1 p.m. on Wednesday at Holding Funeral Home (17 E. 3rd St., N.) in Big Stone Gap, VA. Funeral services will be Wednesday, March 1, 2017 at 1 p.m. in the Holding Funeral Home Chapel with Apostle Yanthophalees Jackson officiating. Burial will follow in Powell Valley Memorial Gardens Big Stone Gap, VA. To view the obituary online and offer condolences, please visit www.holdingfuneralhome.com. Holding Funeral Home is serving the Livingston family.

Fayetteville, NC Odessa Mae Bailey Livingston, age 77, a longtime resident of Fayetteville, N.C., passed away on Tuesday, February 21, 2017. Odessa was born in Gainesville, TX and at a young age moved to Pecos, Texas, where she graduated... View Obituary & Service Information

The family of Odessa Mae Livingston created this Life Tributes page to make it easy to share your memories.

Send flowers to the Livingston family.