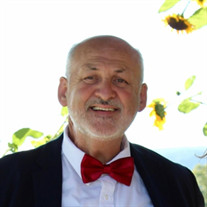 Pennington Gap, VA Pastor David Jones David Jones, of the Dot community, went to be with the Lord on Tuesday, January 26, 2021. He was born on May 10, 1958 in Noblesville IN to the late Carl and Leona Jones, and was a Lifelong resident of Lee County. David took pleasure in spoiling his grandchildren after retiring from several jobs in the community, including Supervisor of Morrell Motors and several positions at Lee County Hospital. He fulfilled his calling of evangelism and pastoral ministry for 40 years and is currently serving as Pastor of Christian Fellowship for more than 20 years. He was preceded in death by his son Joshua Paul “Baby Josh” Jones; his parents, Carl and Leona "Toni" Jones; his grandparents Rucker and Emma Jones and Olin and Loretta Willis; and one sister Lena “Cricket” Jones. He is survived by his wife of 39 years, Barbara Jones; two sons, Jonathan Jones and wife Brooke, and Joshua Mosley and wife BrookLynn; two daughters, Whitney Ward and husband Wes, and Maranda Karry and husband David; five granddaughters MadiLynn, PaiLynn, RiLynn Mosley, Arya Houston, and Azalea Karry; three sisters, Lou Jones, Lisa Jones, and Becky Miller and husband Danny; four brothers, Nathan Jones and wife Karen, Mark Jones and wife Marie, John Jones and wife Janet and Steve Jones; several special sister-n-laws, brother-n-laws, nieces, nephews, aunts, uncles and other relatives and friends. The family will receive friends Saturday, January 30, 2021, from 12 until 2:00 pm, at his church, Christian Fellowship, in the Dot community with services at 2:00 pm with Jonathan Jones officiating. Music will be provided by his Church Family. Graveside service will follow after the services at Lee Memorial Gardens in Woodway, VA. Pallbearers will be Joshua Mosley, Mark Jones, John Jones, Steve Jones, Nathan Jones, Wesley Jones, Wes Ward and David Karry. A tribute video has been created for family and friends at: https://www.tributeslides.com/tributes/show/ZPS3K6M5MDG2FG9P Due to Covid-19 Regulations, those attending the funeral are ask to wear masks/facial coverings and practice social distancing at all times. You may go online to view the obituary, sign the guest registry, or leave the family a condolence at www.holdingfuneralhome.com. Holding Funeral Home is serving the family of Pastor David Jones.

Pennington Gap, VA Pastor David Jones David Jones, of the Dot community, went to be with the Lord on Tuesday, January 26, 2021. He was born on May 10, 1958 in Noblesville IN to the late Carl and Leona Jones, and was a Lifelong resident of Lee... View Obituary & Service Information

The family of Pastor David Jones created this Life Tributes page to make it easy to share your memories.

Send flowers to the Jones family.