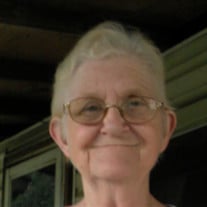 Big Stone Gap, Virginia Patsy G. Sproles 80, left this earth to be in the presence of her heavenly father, on Thursday (April 9th ) at her residence in Big Stone Gap, Virginia. She was born in Big Stone Gap Virginia in 1935, the daughter of the Late; Charles and Mary “Willis” Taylor. She was a loving mother, grandmother, great grandmother and friend. She was a member of the; First Church of God in Norton Virginia. She was a virtuous woman; who had extraordinary culinary skills, she truly loved to feed her family. She was proceeded in death by her husband; Harry Edward Sproles, two children; Kathy Hembree, and Terry Sproles; Honorary mother; Margaret Lane, brothers; Homer Robinson and Earl Robinson,Grandson; Brian McPherson. She is survived by her five children; Pamela Mullins husband Mickel of Wise, Margaret McPherson husband Mike of Middlebury, Kim Daugherty husband Ronald of Big Stone, Dan Sproles fiancé Meta Hoath of Indiana, Delena Bentley fiancé Stan Johnson of Big Stone Gap, she had 22 grandchildren, and 40 great grandchildren, brothers, Richard Lane wife Ethel of Big Stone Gap,Buddy Lane of Big Stone Gap,sister Phyllis Reed, several nieces and nephews other relatives and friends. The family will receive friends on Sunday (April 12, 2015) from 5 p.m. until 8 p.m. for the visitation at Holding Funeral Home Big Stone Gap. The body will lie in state for one hour prior to the funeral service which will be conducted at 1:00 p.m on Monday (April 13) at the Mckinney Chapel in Rogersville TN. The interment will follow in the Mckinney Chapel Cemetery. Pallbearers will be; Justin McNutt, Cody Sproles, Brad McPherson, Mickel Mullins, Smokey Mullins, and Andrew McPherson. You may go online to view the obituary, sign the guest registry, or leave the family a condolence at www.holdingfuneralhome.com Arrangements have been entrusted to Holding Funeral Home of Big Stone Gap.

The family of Patsy Sproles created this Life Tributes page to make it easy to share your memories.

Send flowers to the Sproles family.