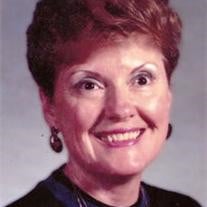 Bristol, VA Patsy Yates Robinette, 74, died Thursday (April 19, 2012) at Grace Healthcare of Abingdon, VA, following an extended illness. She was a former resident of Big Stone Gap. She was born in Dickenson County near Fremont having moved to Kingsport at an early age. Her parents, Herbert and Clara Hay Yates, and one older brother, Thomas F. Yates, predeceased her. She was a graduate of Dobyns-Bennett, and earned a Bachelor's Degree from Lincoln Memorial University. In addition to being a stay-at-home Mom, she was a former elementary and secondary teacher in Wise County and Waynesboro (Va) City Schools for a total of 17 years. She is survived be her husband of 51 years, Bruce Robinette; a daughter, Beverly Robinette, (Chip Burkholder) Glade Spring, VA; one son, John T. Robinette, (Donna) Henderson, NC; one sister, Kay Dale, Kingsport; two brothers, Steve Yates, Kingsport and Ronald Yates, Jamestown, NC; four grandchildren; and a host of great caregivers. She was a member and formerly active in the Trinity United Methodist Church, Big Stone Gap for many years where she served as an adult Sunday School teacher and choir member. She was an affiliate member of the State Street United Methodist Church in Bristol, and Suntree United Methodist Church, Melbourne, FL. A Memorial Service will be conducted at the Trinity United Methodist Church, (203 E. 1st. St., S.) Big Stone Gap, on Friday, April 27th at 3:00 p.m. The family will receive friends beginning at 1:00 p.m.. Pastors Dr. Ken LaDuke and Howard Taylor will be conducting the service. In lieu of flowers, the family requests those who wish may make a contribution in Patsy's memory to the Alzheimer Association, 207 N. Boone Street #1500, Johnson City, TN 37604. A private Spreading of Ashes interment will take place at a later date. To view the obituary online and sign the registry, please visit www.holdingfuneralhome.com. Holding Funeral Home is honored to serve the Robinette family.

The family of Patsy Yates Robinette created this Life Tributes page to make it easy to share your memories.

Send flowers to the Robinette family.