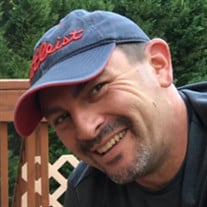 Buford, GA Robert “Robbie” Gottleib Meyer, 44, of Buford, GA passed away unexpectedly Saturday, December 24, 2016 at Bryson City, NC. Robbie was born February 24, 1972 in Scottsbluff, NE to Stephen G. and Cheryl “Cheri” (Johnston) Meyer. Robbie attended local grade school and was active in Legion and All Stars baseball. He graduated from Gering High School in 1990 and enlisted in the United States Navy. Robbie served his country for 17½ years and attained the rank of Chief Petty Officer. He was a Weapon Control Specialist and a Plank Member on the USS George Washington. He also served aboard the USS Carter Hall. After the Navy, Robbie went to work for Elekta installing radiation systems. He excelled at Elekta and was the Regional Service Manager for the Mid- Atlantic Region at the time of his death. He worked with hospitals and cancer treatment centers worldwide. Robbie’s employment at Elekta was very important to him since his mother, Cheri, passed away from cancer. On October 13, 2006, Robbie married the love of his life and best friend, Tara Johnson. Together, they made their home in Buford, and loved their five children Kayleigh, Leah, Kristin, Robert Thomas and Austin. Robbie loved Nebraska football and constructing Star Wars Legos with his son, Austin. He enjoyed baseball, golf, softball, going to casinos and playing Texas-Hold ‘Em with friends and family. He had a love of Star Wars movies and collecting Star Wars memorabilia. His practical jokes, quick wit and sense of humor will be missed. As Robbie would say, “May the force be with you.” His mother, Cheri, grandparents, Robert & Erma Johnston and Emil & Irma Meyer preceded Robbie in death. Robbie is survived by his wife and children of Buford, GA and two grandchildren, Lilliana and Elizabeth. He leaves behind his father, Stephen and a sister, Krista of Gering, NE; a brother, Matthew of Gillette, WY; three nieces, Tayber Meyer, Birkleigh Meyer and Maisy Hergert of Gering, NE and many uncles, aunts and extended family. The family will receive friends from 2 to 4 p.m. on Saturday at Holding Funeral Home (17 E. 3rd St., N.) in Big Stone Gap, VA. Military rites, by local V. F. W. and D. A. V. posts, will be accorded at 4 p.m., just prior to the Celebration of Life Service, in the funeral home chapel with the Rev. Mike Jones officiating. Cremation will take place per Robbie’s request. There will also be a memorial service in Gering, NE at a later date. In lieu of flowers, a memorial fund for Robbie’s children will be announced at a later date on his wife, Tara’s Facebook page. To view the obituary online and offer condolences, please visit www.holdingfuneralhome.com. Holding Funeral Home is serving Robbie Meyer’s family.

The family of Robert Gottleib "Robbie" Meyer created this Life Tributes page to make it easy to share your memories.

Send flowers to the Meyer family.