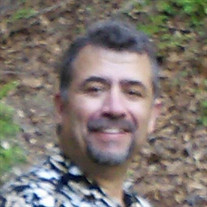 Big Stone Gap, Virginia Roger Scott McLellan 49, went to be with His Lord and Savior unexpectedly on Sunday, October 25, 2015. He was born in Caro, MI on July 19, 1966 to Theron and Sylvia McLellan. He graduated from Caro High School in 1985. He served in the US Air Force as a munitions expert. Roger received several awards, became sergeant and was honorably discharged. He went into manufacturing first at Viking Window Inc. in Portland, OR, and later at Castex Inc. in Holland, MI. He married Lori Jean Graveling on May 24, 1996 in Dutton, MI . He was hired by the United States Postal Service in 1998 and worked into the position of Postmaster. He has worked in many different post offices as he excelled in his work and “climbed the ladder.” During the last two years, he worked first in Big Stone Gap Post Office and then until his death in Gate City Post Office. Roger loved the Lord and shared his faith with others. He was active in church life. He worked with Cadets and AWANA. He was involved with Forgotten Man Ministries and shared his faith weekly in the jail, when in Michigan. Roger was a loving husband and father that was committed to his family. He enjoyed being outdoors; seeing God’s creation, grilling, hiking, gardening, fishing and being by the water. Roger had a huge heart and a great sense of humor. He loved life, truly cared about people, no one was a stranger for long and was always willing to help. He could anticipate people’s needs and then do whatever he could to help them. He always had a smile for everyone, as well as, a word of encouragement. Whatever Roger did, he did with his whole heart. This was evidenced by how he excelled in all that he did. Roger enjoyed spending time with his family and friends. He has taken a part of us with him. He is DEEPLY MISSED!!!! He was preceded in death by his stillborn daughter, Marilyn Ruth McLellan, his brother Ruben McLellan. He is survived by his loving wife Lori McLellan, his three children Joshua, Rosamarie, and Jonathan McLellan, his parents Theron and Sylvia McLellan, siblings; Debbie McLellan, Carl & Kim McLellan, Linda & Keith Parks, Gary & Mary McLellan, Dorothy & Randy Hunt, Marty & Lena McLellan, Lisa McLellan, and several other relatives and friends. The family will receive friends on Thursday (Oct 29) from 5p.m. until 7 p.m. at Holding Funeral Home in Big Stone Gap, Virginia. The funeral service will be conducted following the visitation in the funeral homes chapel with the Pastor James Ray Holcomb officiating. You may go online to view the obituary, sign the guest registry or leave the family a condolence at www.holdingfuneralhome.com Holding Funeral Home is honored to serve the McLellan family.

Big Stone Gap, Virginia Roger Scott McLellan 49, went to be with His Lord and Savior unexpectedly on Sunday, October 25, 2015. He was born in Caro, MI on July 19, 1966 to Theron and Sylvia McLellan. He graduated from Caro High School in... View Obituary & Service Information

The family of Roger Scott McLellan created this Life Tributes page to make it easy to share your memories.

Send flowers to the McLellan family.