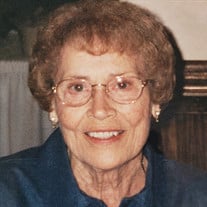 Big Stone Gap, VA Ruth L. Stapleton July 7, 1924- August 12, 2019 (95) died peacefully at home with family close by after a year long illness. Ruth was born and raised in the area, and was a member of the East Stone Gap Methodist Church. She loved the Lord and was a caring and respected member of the community. She was employed as a unit secretary at Lonesome Pine Hospital, when it firs opened, until her retirement. She returned to LPH to serve as a pink lady with the auxiliary group for many years. She was preceded in death by her parents Nelson and Eva Leonard, her husband Charlie F. Stapleton, Sr. , one son Dennis Stapleton Sr., two brothers; Kenneth and Paul Leonard, two grandchildren C.Frank Stapleton III, and Michele Stapleton Hylton. She is survived by one son,Charles Stapleton Jr. and wife Loretta of Big Stone Gap, one daughter Patricia Stapleton Hall of Fall Branch TN, Daughter in law Phyllis D. Stapleton of TN, five grandchildren; Col. Michael Stapleton of Fl, Dennis Wayne Stapleton Jr., Keith Pl Stapleton, Teresa Thompson, Samuel Hall all of TN, brother, Robert Leonard wife Robin, Special Niece Martha of Norton, She was blessed with 18 great grandchildren and 8 great great grandchildren, many nieces and nephews, her close companion canine of 17 years "Peanut" The family sincerely appreciates the compassionate care Ruth was given by Intrepid Home Health and Caris Hospice. The family will receive friends on Friday (Aug 16th) at Holding Funeral Home from 5 p.m. until 7 at the funeral home in Big Stone Gap, the funeral service will be conducted following in the funeral home's chapel with Pastor Brad Stapleton officiating. A committal service will be held on Saturday at 10 a.m. in Powell Valley Memorial Gardens those wishing to attend are asked to meet at the funeral home by 9:30 to go in procession. Grandsons will serve as pallbearers. Holding Funeral Home is in charge of the arrangements.

Big Stone Gap, VA Ruth L. Stapleton July 7, 1924- August 12, 2019 (95) died peacefully at home with family close by after a year long illness. Ruth was born and raised in the area, and was a member of the East Stone Gap Methodist Church. She... View Obituary & Service Information

The family of Ruth L. Stapleton created this Life Tributes page to make it easy to share your memories.

Send flowers to the Stapleton family.