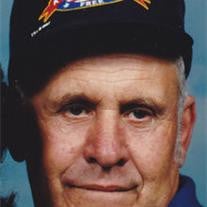 Keokee, VA Troy Kelly, 87, went to be with his Lord on Wednesday (Feb. 8, 2012) at Norton Community Hospital. He was a lifelong resident of Keokee, Va. He was a retired coal miner with the Sunrise Coal Co., with 30 years of service, and was a member of the U. M. W. A.. He was a member of the Keokee Church of God. He was preceded in death by his parents, James and Sally (Cloud) Kelly; five brothers; four sisters; and two sons-in-law, Carl Baldwin and Ronnie Owens. Surviving are his wife of 61 years, Jenell Kelly; three daughters, Rhonda Kelly, of the home, Joyce Sluss and husband, Ray, and Mary Owens, all of Big Stone Gap; two sons, Terry Kelly and wife, Nicole of Mt. Holly, NC, and Ronnie Kelly and wife, Melinda of Appalachia, VA; seven grandchildren, Melissa Brummette and husband John, Kevin Baldwin and wife Natasha, Scott Baldwin and Julie, Wendy Ray and husband Terry, Christopher Owens and wife Pam; Josh Kelly and Nathan Kelly; four great grandchildren, Matthew Owens of the home, Dawn Owens, Nikkie Baldwin and Kevin Baldwin; one brother, Willard Kelly of West Virginia; four sisters, Bertha and Sue, both of OH, Laura of Florida, and Myrtle of West Virginia; and several nieces and nephews. The family will receive friends from 4:00 until 6:00 p.m. on Saturday at Holding Funeral Home (17 E. 3rd St., N.) in Big Stone Gap. The funeral service will be conducted at 6:00 p.m. Saturday in the funeral home chapel with the Rev. Billy McDonald and the Rev. Bobby Wells officiating. Committal services will be conducted at 1:00 p.m. on Sunday at Powell Valley Cemetery in Dryden, VA. The family and friends will meet by 12:30 p.m. on Sunday at the funeral home to go in procession. The pallbearers will be: Chris Owens, Kevin Baldwin, John Brummette, Jack Wells, Mike Wells, Rod Garrett and Steve Garrett. To view the obituary and sign the online registry, please visit www.holdingfuneralhome.com. Holding Funeral Home is honored to serve the Kelly family.

Keokee, VA Troy Kelly, 87, went to be with his Lord on Wednesday (Feb. 8, 2012) at Norton Community Hospital. He was a lifelong resident of Keokee, Va. He was a retired coal miner with the Sunrise Coal Co., with 30 years of service, and was... View Obituary & Service Information

The family of Troy Kelly created this Life Tributes page to make it easy to share your memories.

Send flowers to the Kelly family.