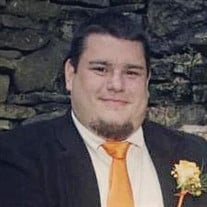 Walter “Walt” Ray Lawson, 38, passed away peacefully on Wednesday, August 25, 2021 at Holston Valley Medical Center in Kingsport, TN, after an extended illness. He was born August 12, 1983, in Wise County, VA., the son of; Bobby and Laura (Fleenor) Lawson. He was a graduate of Lee High School, Class of 2002. After High School, he then attended Radford University where he obtained his Bachelor’s degree in English. He later earned his Masters degree at the University of Cincinnati. He was a teacher with the Lee County School system for eight years in Special Education, and then transferred to Wise County School System where he did the same. He will be dearly missed by all his colleagues and friends. He met the love of his life, Ariel, in August 2012. From their union they produced one child, whom they both dearly loved. He was a family man, who loved his family with all his heart. He cared deeply for the children he had the privilege of working with. “A man full of love, with a Big Heart, and a Big Laugh.” Walt was preceded in death by his mother, Laura Fleenor Lawson of Dryden, VA; his paternal grandfather, Luther Lawson; and his maternal grandfather, Clifton Fleenor. Walt is survived by his wife, Ariel Lawson of the home; one son, Eli Lawson; his father, Bobby Lawson of Dryden, VA; two sisters, Jennifer Lawson of Dryden, VA., & Heather (Tony) Biggs of Pennington Gap, VA; paternal grandmother, Maxine Mellons of Kingsport, TN; several nieces, nephews, close relatives and friends. Visitation will be Saturday, August 28, 2021, from 11:00 a.m. to 1:00 p.m. at Holding Funeral Home of Big Stone Gap, VA., Funeral services will follow at 1:00 p.m. with Pastor R. J. Rose officiating. Graveside will follow in Lee Memorial Gardens in Woodway, VA. Family and friends will serve as pallbearers. A memorial video has been created for family and friends at: https://www.tributeslides.com/tributes/show/63NB9KN6RXDGYNMD An online register is available for the family at www.holdingfuneralhome.com Holding Funeral Home is honored to serve the family of Walter Lawson.

The family of Walter "Walt" Ray Lawson created this Life Tributes page to make it easy to share your memories.

Send flowers to the Lawson family.