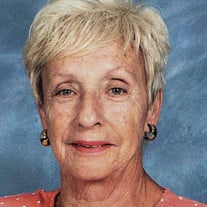 Zephyrhills, Florida Wanda Joan Robbins (Parsons), 86, of Zephyrhills, Florida passed away peacefully on Thursday, March 18, 2021. She was in the comforting presence of family. She was married to the love of her life Jerry Wayne Robbins, with whom she shared almost 65 years of marriage. Wanda was born on October 28, 1934 in Keokee, Virginia. She was the daughter of the late Wade Otis Parsons, of Lee County, Virginia and Nevada Parsons (King) of Harlan County, Kentucky. On April 21, 1952, Wanda married Jerry Wayne Robbins in Lee County, Virginia. Shortly thereafter, they moved to Taylor, Michigan; and raised four children. They built a beautiful cottage on Lake LeAnn in Hillsdale County, Michigan, where they eventually relocated and enjoyed many wonderful times with family and friends. Wanda loved hosting and made the most delicious biscuits and gravy, as well as a chicken soup that would soothe any ailing loved one. She enjoyed sharing cocktails and conversation, and riding on the pontoon boat, which she loved to decorate for the annual Lake LeeAnn Independence Day parade. Her children and grandchildren have many precious memories of time spent with her in this magical place. In 1991, after Jerry retired from General Motors, they sold the cottage and moved full time to Rotunda West, Florida where they built and managed a condominium complex. Wanda loved being able to swim and do water aerobics every day, as this was one of her very favorite activities. They also enjoyed cruises to Barbados, Mexico, and the Cayman Islands among other places. In the late 1990s, Wanda and Jerry decided to go back home, and bought a farmhouse in Big Stone Gap, Virginia. Wanda was in her element there and made some of her best friends in a local water aerobics group. She hosted many family Thanksgiving and Christmas celebrations there and canned some of the most delicious green beans on Earth. She loved sitting on her front porch there, sharing laughs and conversation. Her bright and vibrant personality was a sight to behold. She was a devoted member of the Heritage Church of God, where she was active in various church activities. In 2017 Wanda moved to Zephyrhills, Florida after Jerry’s passing. She continued her water aerobics there and reconnected with lifelong friends. Wanda was a member of the Red Hat Society and the Order of the Eastern Star. She was preceded in death by her husband Jerry Wayne Robbins, Sister Beulah Parsons, brothers Arnold and Ledford “R.T.” Parsons, brother-in-law Buster and his wife Joyce Robbins, and several dear friends, including June Sanford. Her beautiful life will forever be cherished by her four surviving children: Michael (Susan) Robbins, Terry (Janet Barker) Robbins, Curtis (Teri) Robbins, and Robin (Randy) Briggs; six grandchildren: Michelle (Brian) Cicirello, Nicholas (Stacey) Robbins, Travis Briggs, Alec Robbins, Erik Briggs, and Blake (Amy) Robbins; four great grandchildren: Anabelle Cicirello, Colin Robbins, Brielle Robbins, and Samuel Cicirello; brother Bill Parsons, and sister-in-law Sonja Robbins. A visitation will be held on Saturday, March 27, 2021 from 11 a.m. to 1 p.m. at Holding Funeral Home in Big Stone Gap, Virginia, the Funeral service will be conducted following in the Funeral home's chapel with Pastor Ronnie Mutter Officiating. The burial will follow in Powell Valley Memorial Gardens. A memorial video has been created for family and friends at: https://www.tributeslides.com/tributes/show/C5RR8G47DR4GQ6PT You may go online to view the arrangements, sign the guest registry, or leave the family a condolence at www.holdingfuneralhome.com Holding Funeral Home is in charge of the arrangements.

Zephyrhills, Florida Wanda Joan Robbins (Parsons), 86, of Zephyrhills, Florida passed away peacefully on Thursday, March 18, 2021. She was in the comforting presence of family. She was married to the love of her life Jerry Wayne Robbins, with... View Obituary & Service Information

The family of Wanda Joan Robbins created this Life Tributes page to make it easy to share your memories.

Send flowers to the Robbins family.