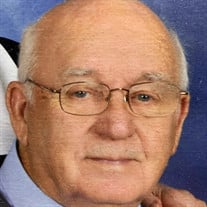 Newark, OH In the arms of Angels, on September 21, 2021, Willard Samuel Stidham was carried home to be with his Lord and Savior. He was 94 and a half years old. On March 26, 1927, Willard and Nora Myrtle welcomed a son to their small family.... View Obituary & Service Information

The family of Willard Samuel Stidham created this Life Tributes page to make it easy to share your memories.

Send flowers to the Stidham family.