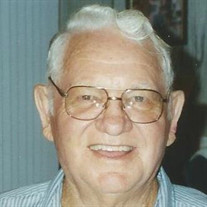 Keokee, Va. Elder William Roy Flanary passed away on July 18, 2015 at the Norton Community Hospital, Norton Va. Brother Roy was born to the late William “Willie” Elbert and Nancy Belle (Bush) Flanary on January 25, 1923 at Clover Fork, Kentucky. He made his stay on earth 92 yrs, 5 months and 23 days. Brother Roy was a resident of Stoney Lonesome Road, Keokee Virginia which is Billie Jean’s old home place. They moved there in 1978 after he retired from working in the coal mines. He graduated from Keokee High School in 1941. He joined the army in 1943 during WW II and was discharged in 1945. Brother Roy belonged to the UMWA for 50 plus years and retired from Island Creek Coal Co at Wheelwright Ky. He belonged to the Masonic Lodge # 899 at Wheelwright, Ky and moved his masonic membership to the Mason Lodge #326, Dryden Virginia, where he reached the level of Master Mason. Besides his parents he was preceded in death by his wife of 69 years, Billie Jean (Calton) Flanary, his only daughter Sheila Faye Kennard, his brothers: Talmadge, Merrill and Glenn, his sisters: Goldie, Estell, Lois, Lelia and Helen. He leaves to mourn his passing: Dexter Leroy and wife Brenda of Parkersburg W. Va., Curtis Patrick and his wife Charlotte of Lawrenceburg, Ky., William Phillip and his wife Cathy of Gray, Tenn.. His grandchildren: Lisa Lee, Angela Faye, April Michelle, Mona Jean, William (Willie) Oscar, Brian Kenneth, William Patrick, Amanda Burke, Brent Curtis, William (Billy) Phillip II and Leah Elizabeth. Great Grandchildren: Christofer Jasun (CJ), William Bailey, Fiana Belle, Cole Isaac, Josie Nole, Brayden Kenneth and Vivian Jean. Step Great Grandchildren: Anthony, Ciara, Austin, Zachary, Jeremiah, Gracie and one Step Great Great Grand Child – Carter along with a host of friends and relatives. Brother Roy joined the Oak Grove Primitive Baptist Church on March 2, 1952. He was baptized on April 6th, 1952 by Elder Dan Robinette and Deacon John Morris. He was ordained an Elder in 1955 and was appointed as the moderator of the church in September 1955 and faithfully served her until his health prevented him from attending. He was also appointed moderator of the Delphia Church, Dante Va. on March 17, 1956 and the McClure Church, McClure, Va. on February 4, 1971. Brother Roy answered his calling with his whole heart. His first duty was to the church and her members. His greatest gift was the love he had for his Brethren and Sisters in the Lord, especially when they would come and stay at his home. He so looked forward to meeting times, Union Meetings and Associations, where he could set and talk about what great things God did for his son Adam. Brother Roy was one that believed in a sovereign God and the total depravity of Man. One that understands, that God through Christ deals with his people, here on Earth. That Eternity is the habitation of God and we of the first Adam will return back to where we came from. Visitation will be at the Oak Grove Church, Keokee Virginia on Tuesday, July 21 from 5:00 pm until 9:00 pm, with the local Masonic Lodge presenting the Masonic funeral ceremony at 7:00 pm. His funeral will be held at the Oak Grove Primitive Baptist Church, Keokee, Virginia on July 22, 2015 at 11:00 am with Elder Reece Maggard and Elder Ronnie Beavers officiating. The internment will be in the Powell Valley Memorial Gardens, Big Stone Gap, Va. with the Virginia National Guard Honors Team and local VFW and DAV posts, providing military rites. His grandsons and great grandsons will be the pall bearers. In lieu of flowers, the family requests that memorial donations be made to the Oak Grove Church, c/o 281 Stony Lonesome Road, Keokee, VA 24265. To view the obituary online, sign the guest registry and offer condolences, please visit www.holdingfuneralhome.com. Holding Funeral Home is honored to serve the Flanary family.

The family of Elder William Roy Flanary created this Life Tributes page to make it easy to share your memories.

Send flowers to the Flanary family.